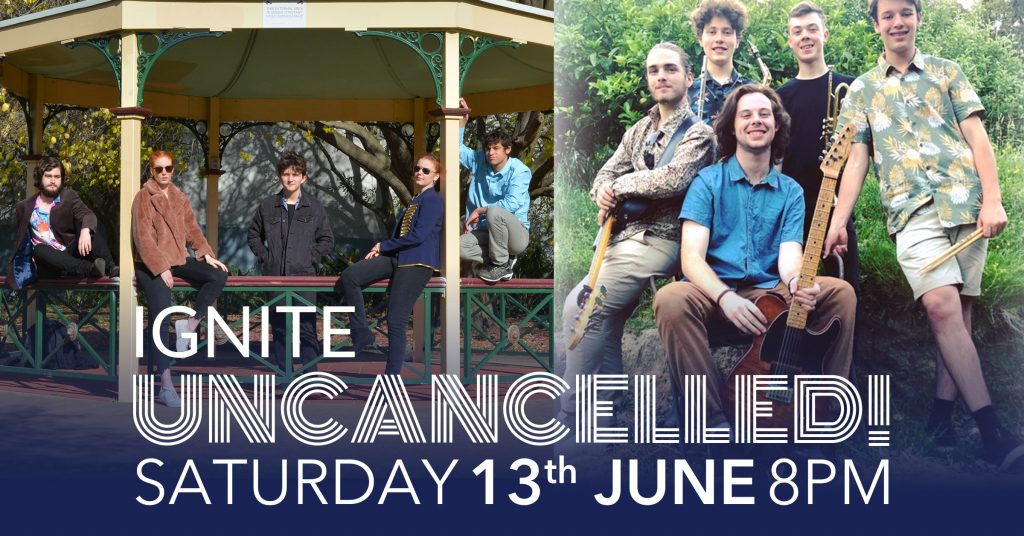 RSVP to Facebook Event!
Our eighth live streamed performance starts at 8pm on June 13th with Chloe James x Midnight & Just Wing It taking the stage for Ignite Uncancelled at our new custom built broadcast studios!
Prepare to be amazed by these talented local artists – we’ll be broadcasting them live on Facebook, Instagram and YouTube from 8pm!

Remember to follow their pages, RSVP & share with all your friends: Ignite Uncancelled – Chloe James x Midnight & Just Wing It
Chloe James and the Midnight Band

Chloe James and the Midnight Band are a Melbourne based indie pop band. Thrown together for a VCE music performance exam, the members quickly realised they shared very similar musical tastes and influences. After coming together for a one off gig in 2019, the group decided to stick together and create more music of their own. Heavily inspired by various jazz, funk and alternative artists, the band have found their footing making catchy tunes to spread good vibes to all. Currently working on their debut album, the band hopes to release new music into the world by the end of 2020. The band is lead by Chloe James on vocals and acoustic guitar, with Michael Birkett on keyboard, Josh Lloyd Sacks on bass, Jonathan Pardo on lead guitar, and Grace James on drums.

Just Wing It is a jazz funk group from the south east of Melbourne. The band formed in 2019 after several jam sessions. Just Wing It is a five piece band consisting of Francis Nickell on drums, Noa Silversten on Bass, Liam Russell on trumpet, Jack Phillips on Sax and Flute and Ayden Gadsden on Guitar and vocals. They have played several gigs over the last year including the Melbourne zoo.